First of 100 Cycle-Friendly Employers in Norway 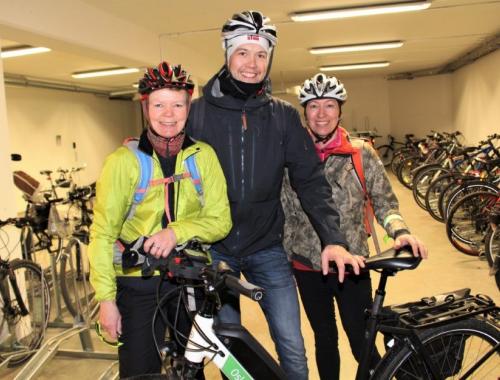 Oslo was awarded the prestigious European Green Capital title for 2019, the city work towards motivating employees and inhabitants to choose green mobility. The Norwegian Cyclists’ Association (SLF) and the Climate Ministry of Oslo signed an agreement in January, with the overall goal of certifying at least 100 workplaces as “Cycle Friendly” by the end of the year.

Safe bike-parking, a functional bike wash, personal lockers. No wonder Åse Røstum Norang smiles when she arrives at the large bike room at Helsfyr, after nine kilometers biking to work in the morning. She is one of a thousand employees in the municipality of Oslo, who, during 2019 will work at a certified Cycle Friendly Employer.

Undervisningsbygg, the largest municipal developer of schools in Oslo - are the first workplace to be certified in the agreement. SLF have evaluated a total of 50 indicators in order to establish how Undervisningsgsbygg, who employs around 200 people, have facilitated for bikes and how they work towards motivating their staff to choose biking.

Bodil Motzke, who is an environmental advisor at Undervisningsbygg bikes to work regularly. She sees the certification as a positive opportunity, both for the employees and for the employer. It will function both as a constant reminder on how well their workplace has facilitated for cyclists and hopefully motivate more people to bike, as well as being able to benchmark their workplace and compare their facilitation to other workplaces in the city. Motzke also emphasizes how the action list provided by SLF motivates Undervisningsbygg to further improve their facilitation for cyclists.

Motzkes biggest motivator for biking to work is that it makes her happy, she gets to spend time outside on her way to work while at the same time keeping in shape. Her colleague, Magnus Wien Klæboe often choose to use one of the electrical bikes available for all employees when travelling to inspect building sites or attending meetings outside the office.

"Using an electric bike is definitely the fastest way to travel. Two of the bikes available have spiked tires, so I can also use these during winter. It’s easy, comfortable – and I don’t need to think about finding a parking spot for my car. In addition to this, it feels good to use my body and being active during the day."

Undervisningsbygg has the responsibility for 177 schools in Oslo and about 85 000 students and 13 000 employees use these buildings daily. As part of their cycle policy, Undervisningsbygg has installed around 500 bicycle racks since last summer – and expect to install 1000 – 1500 new racks this summer. At least half of these will be placed under a roof, protecting the bikes from rain and wind.

Each year, a joint bicycle ride for all employees is arranged, where they ride around town and visit schools built by Undervisningsbygg. After the ride, all employees end the day with a social gathering. The workplace also participates in the international “Bike to work” – campaign annually.

The Climate Ministry of Oslo has further expanded their focus on motivating inhabitants to choose green mobility – all municipal workplaces can now apply for a grant to improve their facilitation for cyclists. The certification through The Norwegian Cyclists’ Association offers a report presenting the positives and negatives of each workplace, which also includes a list of actions to improve their facilitation. The workplace can thereby apply for the grant and implement new improvements.

The Norwegian Cyclists’ Association has a goal of certifying at least 100 businesses in Oslo in 2019, and are currently in the process with 17 workplaces. In addition, 9 other businesses in the private sector in the cities of Oslo, Kristiansand, Bergen, Stavanger and Trondheim are getting certified this year.

The Norwegian Cyclists’ Association is a member of the "Cycle-Frienldy Employers Consortium" which currently implements the certification in 14 countries.