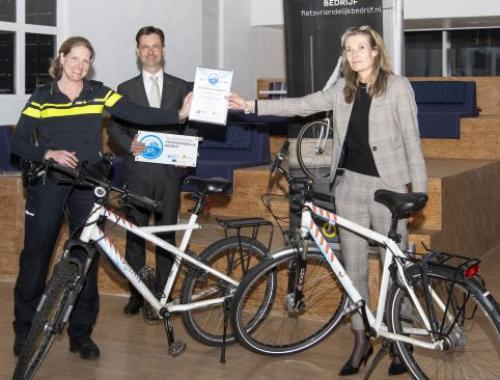 Fietsersbond has awarded the Dutch Police a Gold Level CFE Certification. With more than 60,000 employees, the Dutch Police force is the largest employer in the Netherlands, a fantastic addition to the growing CFE network.

The Dutch Police has been awarded the prestigious Gold Level Cycle-Friendly Employer (CFE) Certification by ECF Member and CFE National Coordinator for the Netherlands, Fietsersbond. The Dutch Police force is largest employer throughout the Netherlands, making this a monumental addition to the CFE network, which now has over 300 members across Europe.

Director of Fietsersbond Esther van Garderen presented the certificate to Jolanda Aalbers, Head of Operations for Eastern Netherlands Police, stating, “We hope that the example of the police inspires many other employers to become more cycle friendly as well.”

The Dutch Police currently offers attractive bicycle schemes for employees, including a bicycle allowance for commuting. Over the next five years, more than 500 police stations and other locations will be renovated and equipped with facilities up to Gold Level CFE Certification. For example, bicycle sheds, charging points, repair services as well as changing rooms and showers will be provided across all police locations.

“This certificate is a reward for our efforts to stimulate the use of the bicycle. But I also see it as a boost for all colleagues who are already on their bikes. I'm sure there will be many more in the coming years,” said Aalbers.