Cycling & the Workplace: a story of Cycle-Friendly Employers at Velo-city 2019 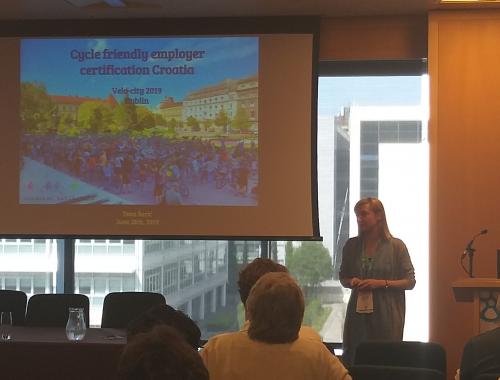 Bike-to-work campaigns are implemented across multiple countries, in diverse formats, with varying levels of success, in theory with a shared objective; employees cycle to work and employers enable them to do so.

One certification scheme centralises efforts on promoting cycling to the workplace, by establishing a European standard for cycle-friendly companies; Cycle-Friendly Employer (CFE).

On Friday 28th June 2019, members of the CFE Consortium presented their national implementation experiences to a packed room of Velo-city 2019 delegates. CFE Members from UK, Norway and Croatia shared their experiences and were joined by the first Cycle-friendly Employer of Belgium – EASME, who in turn presented on the value of the certification to them as an employer.

Matt Mallinder, Director of Influence and Engagement at Cycling UK and CFE Chairperson, opened Friday morning’ session with an introduction to the certification scheme, before diving into the implementation of it in the UK. The latest UK CFE Certified employer is the The Department for Infrastructure (DfI) of Norther Ireland. Cycling UK currently has a dedicated team implementing the scheme, and a lot of companies in the pipeline!

Tena Šarić, Croatian cyclists’ association Sindikat Biciklista, presented on how the CFE Scheme complements and reinforces the rest of the activities of the Zagreb-based organisation. Certifying key employers in different sector, Sindikat Biciklista developed a series of “Firsts” in the “first IT company” to be certified, “first University faculty”, “first high school” to be certified among others, thereby developing a narrative around the scheme in Croatia.

Marta Eri, Consultant at Norwegian Cyclists Association, discussed the first success for the scheme in Norway. Oslo was awarded the prestigious European Green Capital title for 2019, the city work towards motivating employees and inhabitants to choose green mobility. The Norwegian Cyclists’ Association (SLF) and the Climate Ministry of Oslo signed an agreement in January, with the overall goal of certifying at least 100 workplaces as “Cycle Friendly” by the end of the year.

Valentina Colangelo, Project Officer at EASME, and member of the EU Cycling Group (EUCG), showcased the value of the certification for an employer. EASME is the Executive Agency for Small and Medium-sized Enterprises. EASME is located in the heart of Brussels and has 500 employees. No fewer than 100 employees are members of the EASME Cycling Group, a dynamic club of bicycle-minded colleagues who set up informative and playful activities with cycling as a common thread. Building on the success of another campaign promoting cycling to work, the certification was a validation of the cycle-friendliness of the organisation. The European Commission agency obtained a Bronze Cycle Friendly Employer Certificate, but they aim to score a higher certification level soon!