Bicycle with tie in Romania 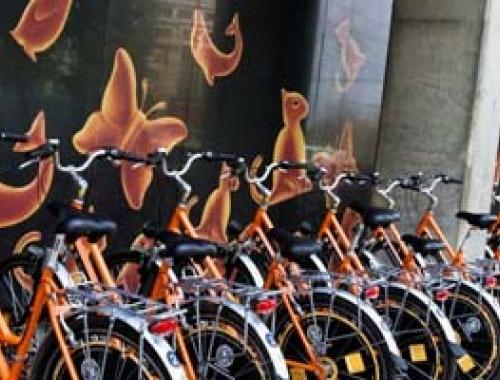 “Bicycles with tie” is the first bike-sharing program in Romania developed for employers to stimulate their employees to use the bike to work. Employees can go to meetings by bike and thus avoid the problem of not finding a car parking place and to avoid the heavy traffic frequently encountered in major cities as Bucharest. The employers can increase employees’ loyalty, can facilitate the interaction between employees and reduce the CO2 footprint. Since May 2010 (release year), 12 companies and public institutions joined the project.

The “Bicycle with tie” project aim is to increase the interest of the authorities and companies in adopting and promoting cycling as a viable alternative transport in large urban areas. GRA approach in identifying the possible CSR project partners is linked with information such as: - No. of employees & avarage age - No. Of locations of the company - Location and acces to bike infrastructure Services included by GRA in the project: - consulting ( nr of bikes necessary in the project, bike types, consulting) - aquisition of bikes, parking slots - branding of bikes - support in internal and external communication, - weekly maintenance of bikes, service - training of the company staff - warehouse, transportation and handling Additional the companies can choose to adopt also other projects like – school bike, pimp my bike, etc. Offering the possibility of using the bikes, we establish a common basis for discussion, for future partnerships that allow us to:  Encourage the adoption of measures and actions to promote the bicycle with the support of the companies drawn in the project  Informing the authorities of the sensitivities that prevents the development of alternative transport in Romania / Bucharest

During 4 years of “Bicycles with tie” program, we have implemented the project in 2 countries, in Romania and Serbia, 5 cities, 10 companies and 18 work places/locations and over 5.000 of participants - a natural development and enlargement of the project in the partner companies. Over 80% of the companies involved in this project are large companies, with more than 3.000 employees, and the rest are SME’s, but all of them have environmental approaches and, starting with our project, they became bicycle friendly.